Featured in Country Life: A Bespoke Farmhouse Kitchen in Dorset 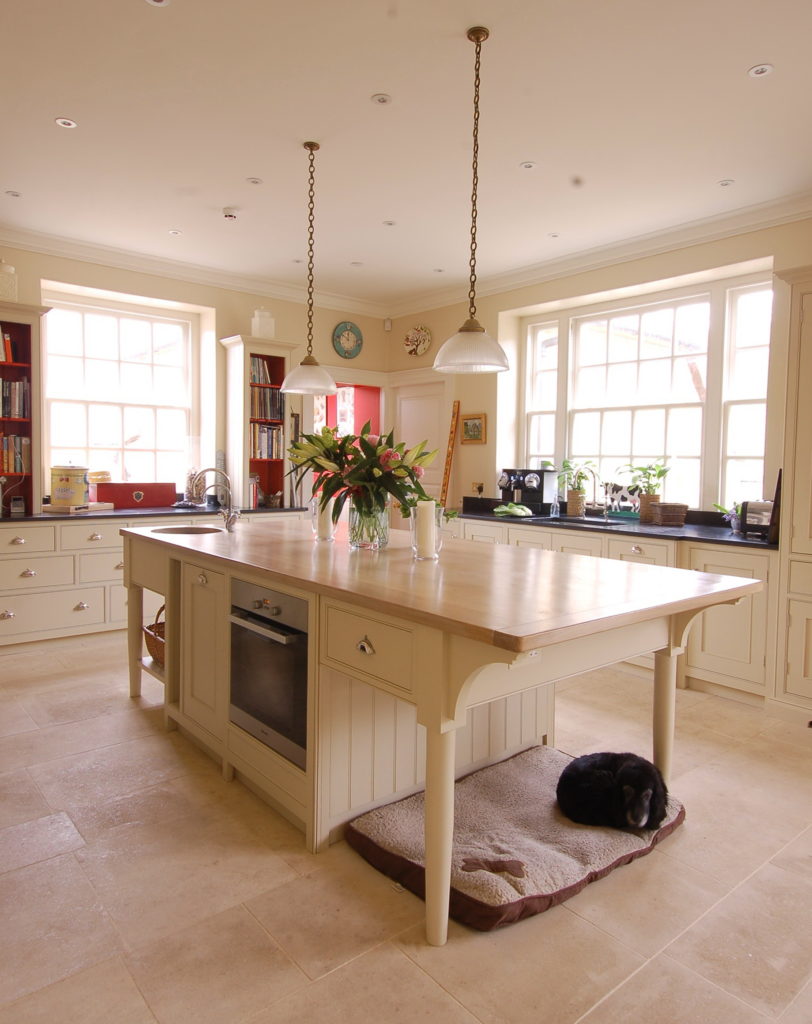 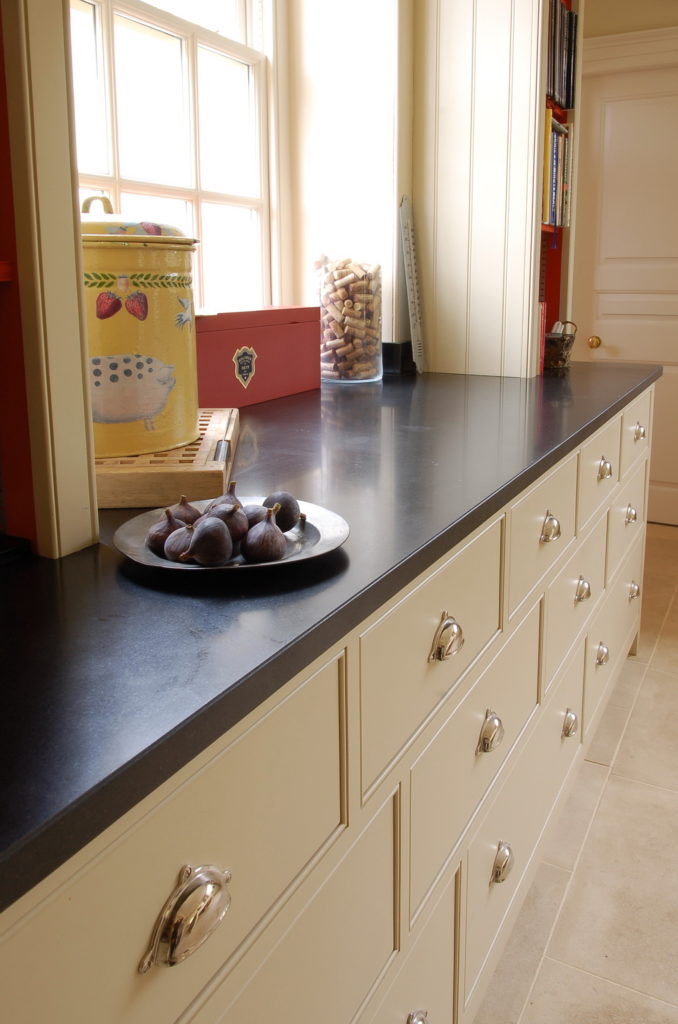 We were thrilled to see a Guild Anderson bespoke farmhouse style kitchen featured last autumn in Country Life, which was covering the design of an award-winning new house. Described by Country Life as a ‘modern classical’ creation, Chitcombe House is a traditional, elegant new country home in rural Dorset. Completed in 2014, the design for this bespoke farmhouse kitchen has some of the most frequently viewed photos in Guild Anderson’s portfolio on Houzz (over 5,000 saves to date). The image of a dog, happily nestled under the kitchen island in a space specifically made for a much-loved pet, clearly strikes a chord for many of us as our ideal kitchen.

Chitcombe is an impressive new build by Stuart Martin of Stuart Martin Architects, Dorset. Stuart’s knowledge of English architecture is evident in the beautifully proportioned rooms, well-planned layout and fabulous views from all sides of the house. Stuart describes his aim is to create a sense of discovery within the architecture, and for this house ‘to have a little flourish slightly above what you would expect to encounter in a Dorset combe.’ This he has certainly achieved, ably supported by Shaftesbury masterbuilders, Shean & Hare.

Nick Anderson was commissioned to design a country kitchen appropriate to the style of the new house. ‘Firstly,’ Nick comments, ‘Our objective was to make the most of the position of the room – sometimes a few compromises are needed with a design, such as planning around windows and doors in a room, but happily not here. This house does not look or feel like a new build. The architect had really thought about where the kitchen was going to be situated. Here, the bespoke farmhouse kitchen design needed to make sense of what is an especially large room – placing the kitchen at one end and the dining room at the other – and it fills the space well. Another consideration was the height of the ceilings: they are are impressively high, a height not always found in a modern home.’

Well-located, the kitchen sits comfortably within the house. It is fortunate also in not being a space you need to move through other than to reach the laundry room or hall, leaving the flow of the new room free from competing as a passage to other rooms, as often found in a smaller build. It made sense to have a more convenient and quicker route from the master bedroom above via the tower staircase leading down to the kitchen, so the design for the new kitchen additionally had to work around a spiral staircase neatly disguised behind a gibb-door (wonderfully well hidden it would be hard to know it was there unless you knew the house well).

Nick chose a Guild Anderson Kitchen Original as the design style best suited to fit naturally with the room. The detail of this design has cockbead beading around the frame and, in place of the usual skirting, in this case the client preferred a plinth base to the cabinets to be consistent with the style of a bespoke farmhouse kitchen.

A feature of the room is the set of drawers purposefully made to look like an apocathary cabinet and add interest. The drawers are usually constructed in a 4-drawers-over-3-over-2 symmetrical layout with no alignment. However in this case, due to the impressive scale of the room, the drawer cabinetry has been enlarged and laid out in an aesthetically pleasing set of 5-over-4-over-3-drawers. It goes without saying this bespoke approach to proportion makes all the difference to the balance of the room in way simply not possible with a modular cabinet.

Unusually for a Guild Anderson kitchen, this island has a wooden surface rather than a stone worktop. In this instance, it gives the softer look needed for the centre of this generously proportioned room. The touch of luxury of honed black granite is well represented elsewhere in the room around the work surfaces. For the island, the client wanted a lighter appearance at one end, providing an attractive and convenient space for the dogs to sleep, away from the Aga and not underfoot. The overhang allows for both a pair of stools and storage within the island. The turned legs to the bar end add a delicacy while the supporting corbels are purely for balance so that the island top appears visually supported.

In the centre of the room, with echoes of a farmhouse table – albeit a very glamorous farmhouse – the far end of the magnificent island also houses a pair of integrated dishwashers and a practical prep sink with a Quooker hot water tap, above a slatted base for the client’s collection of baskets.

Completing the room are Nick Anderson’s eye for details; the bespoke spice racks inside a drawer next to the Aga, a larder cabinet and a pair of tall cookery book shelves made to frame the windows and painted with fabulously orange interiors. These reference the clients’ Dutch nationality, along with some beautiful hand-painted tiles over the Aga.

The Country Life article highlights the well-deserved Georgian Group Award in 2015 for a new building in the Classical tradition, and one we are very proud to have been a part of its creation. 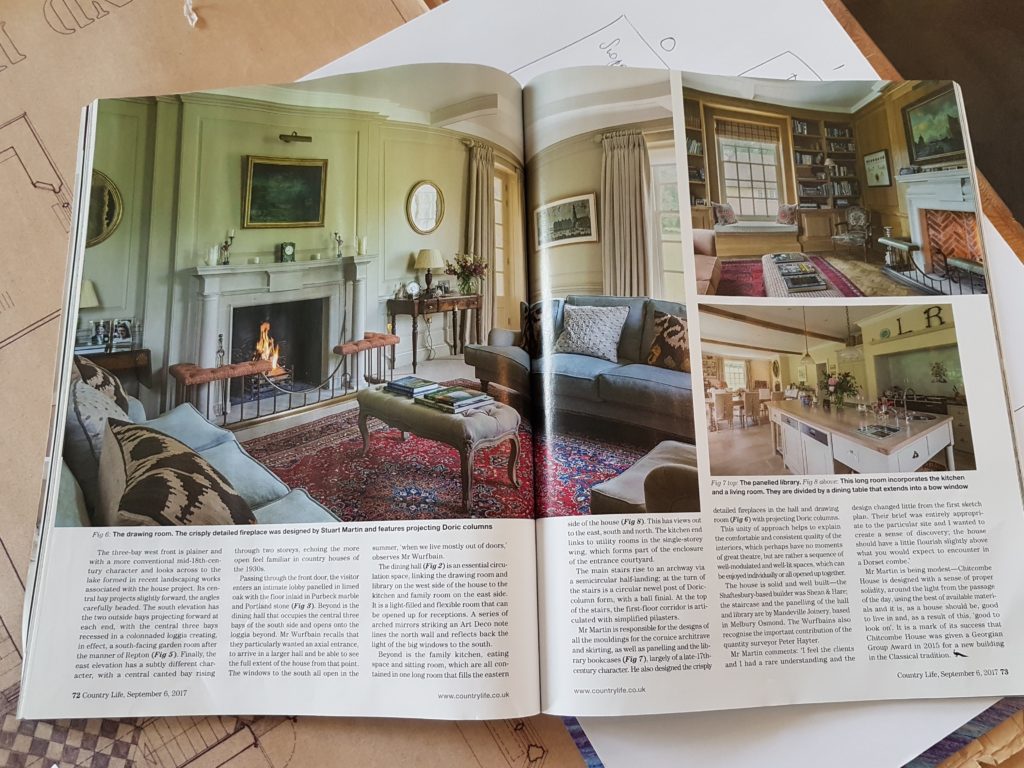