A Hand-Made Kitchen for a Grade II Listed Manor House 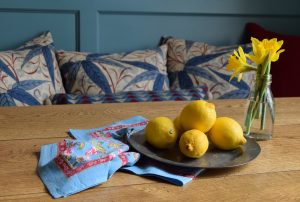 People often ask what the difference is between a high street brand and true handmade cabinetry. This project – an impressive manor house featured in the Domesday Book, rebuilt in the 1700s and again by the Victorians – is a classic example of Guild Anderson’s bespoke work.

With stunning views of the River Stour, high ceilings throughout and a large number of reception rooms, the kitchen in contrast was relatively modest. The client’s choice of handmade rather than off-the-shelf cabinetry was the only viable option to make the most of a complicated layout. Recommended to the client by both builder and architect, Guild Anderson’s insightful design made the difference between creating a small kitchen that was simply functional in the initial architectural drawings, to a beautiful room that flows and joins naturally with the rest of the house. An architect may be an expert in making the most of the exterior, but an experienced designer like Nick Anderson will know best to tackle a compromised internal space in an older house such as this.

It may seem a surprising place to start but walkway widths are fundamental to Nick’s designs. He describes how they are central to each project and govern where the adjoining or opposite unit should be sited. Here, several fundamental differences were made: moving the door leading into the kitchen improved the layout sufficiently to allow full sized appliances in a symmetrical cupboard unit and full depth cabinets. Without this more importantly, it would not have been possible to fit the fridge freezer, oven and cupboard into the design.

Similarly, including a kitchen table was always going to be complicated but the main obstacle was the stairway leading into the centre of the room. Nick designed banquet seating for the table to save space, removed a side cupboard included by the architect, re-shaped and neatly tucked it under the staircase. This is something the team at Guild Anderson are always trying to achieve: by pushing the cupboard into the wall, it created a better looking room, more useful cupboards and spared the kitchen from feeling like a corridor.

Complimented by the vibrant tones of Paint & Paper Library ‘Blue Gum’, the cabinetry is perfectly balanced and elegant. The kitchen cupboards are in Old Rectory style with polished nickel hardware. The eye is drawn to an understated slim glasses cabinet on the far wall. Painted inside to match the external paint colour, with double doors and curved corbel brackets to fit the walkway, the bespoke display cupboard completes the room.

Guild Anderson undertake commissions from small to extensive house renovations, but often the smaller projects such as this one can be more complicated than the larger designs. The company is fast establishing a reputation as much for their ability to find technical design solutions as fine cabinetry makers. It was this that lead the furniture designers to be recommended to the client two-fold on this project – by both the country house specialist building firm, Mouldings, and David Rhodes at Johnston Cave Architects. Nick Anderson explains how often it is not a radical change that is needed, but a knowing tweak can make all the difference. Making sense of a room is at the heart of Nick Anderson and his design team’s focus for every project. 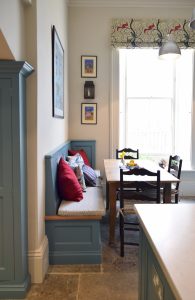 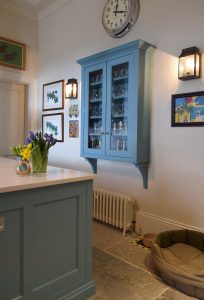